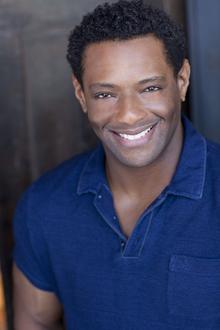 This veteran of stage, film, television, concerts, commercials, voice-overs, and

modeling began his education as a Pre-med major at the University of Miami, having

never stepped upon a stage, nor ever even contemplated any sort of the arts - taking

one acting class as an elective changed his mind, and forever altered his life's course.

Having decided upon pursuing a career as a performer, David headed up to New York,

continuing his education at HB Studios and the Stella Adler Studio, studying

with many well-respected teachers, including the legendary Uta Hagen.

He worked his way through many an Actors' Equity Association showcase

Robinson' in a regional production of TO KILL A MOCKINGBIRD.  Upon his return to New York, however, David soon realized that there were far more jobs available for actors who could sing... so he began singing.  On the advice of his uncle, veteran opera singer and Broadway performer Walter P. Brown, he chose his 1st audition song - "A Woman Is A Sometime Thing" from George and Ira Gershwin's PORGY & BESS and, having never taken a voice lesson, nor ever sung in public, he landed his 1st professional musical gig... on his 1st ever musical audition!  He headed to Tennessee to star as 'Jim' in BIG RIVER.  Soon after, he finally earned his coveted Actors' Equity Association membership card - doing another musical.

Among his many concert appearances, Mr. Damane has also collaborated with Galt MacDermot, composer of the iconic musicals HAIR & TWO GENTLEMEN OF VERONA, on numerous recordings and concert performances of his newer works, as well as his classic hits, including performances at legendary Carnegie Hall, the Guggenheim Museum, and the Great Hall at Cooper Union.  He was also a member of the vocal group THE JENNY BURTON EXPERIENCE, performing at New York's legendary Don't Tell Mama and Resorts Casino Hotel in Atlantic City.  David studies voice in New York with noted teacher/coach Arthur Levy.

David's film and television credits include, among MANY others, LAW & ORDER, LAW & ORDER: SVU, ALL MY CHILDREN, ONE LIFE TO LIVE, HOPE AND FAITH, the recurring role of 'Dr. Arthur Kirby' on GUIDING LIGHT, Sony Pictures' AMERICA, 'Maurice Owens' on NBC's CHICAGO FIRE and CHICAGO PD, CBS's INSTINCT, 'Eddie McKay' on the Cinemax original series JETT, and as 'Leo Abbott' on the CW's reboot of DYNASTY.  Voice-overs include numerous audio books, PBS's AMERICAN MASTERS series, Spokesperson for both Bengay and Blue Cross Blue Shield, and the video games World of Warcraft and Ubisoft's WATCH DOGS.